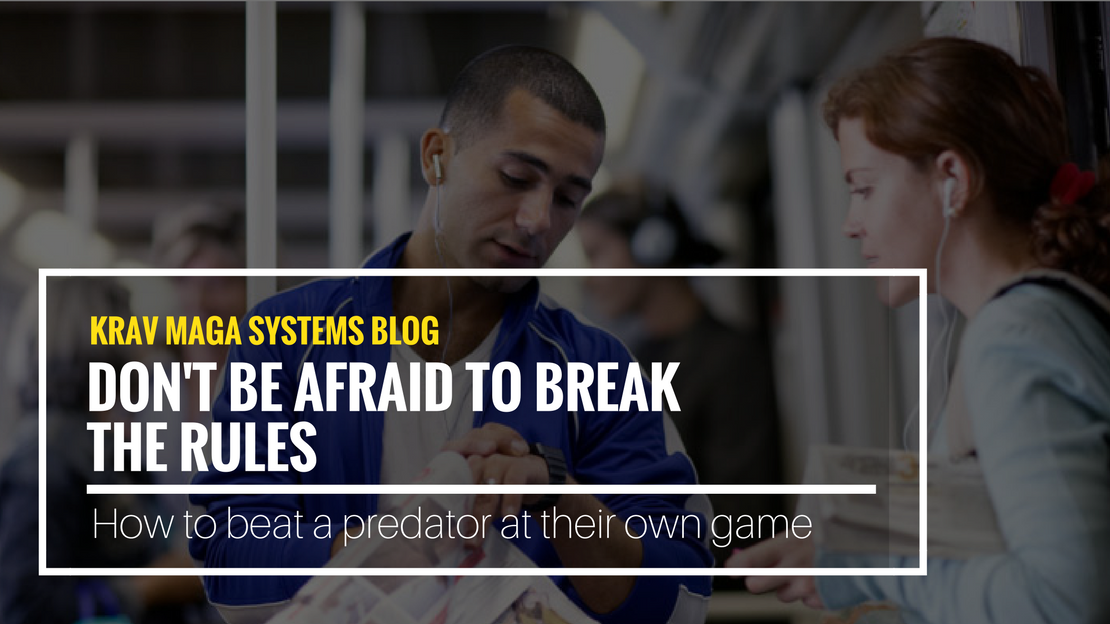 A harmless enough question. Most of us wouldn’t hesitate to look down at our phones or watches and respond. After all, it’s the polite thing to do, right?

You may not know it, but most predators are quite switched on to human behaviour. They rely on you to react a certain way…to ‘follow the rules’ so-to-speak.

Much can (and has been) written about the many ways predators act and how they can be countered. The specific aim of this article is to explore how they take advantage of our societies’ codes of conduct to achieve their goals.

Most people in civil society tend to have a problem being perceived as behaving improperly around others. This is mostly a good thing, as a society without rules is likely not one many of us would prefer to live in.

Unfortunately, this also makes a large portion of people predictable in specific circumstances; and by ‘predictable’ I mean ‘exploitable’.

You also may not realise that most predators don’t want to fight you. They may not even want to use physical force at all. The easier they can get what they want, the better. *There are no guarantees of this; this article works on the analysis of known patterns and the odd of where predatorial behaviour and circumstances can lead*.

First, let’s be clear about what a predator is.

The most common patterns of predators are well documented. The specific classifications change depending on whom you ask, but in this case, the focus is on so-called ‘resource’ and ‘process’ predators.

As the name suggests, resource predators want something you have. Most commonly a physical object/s that you can hand over on the spot. Sometimes they want your money, your watch, your phone, your jewellery (etc), or they may want information. Other times they may not know exactly what they’re looking for, and target you simply because you’re in their ‘fishing net’.

These types differ drastically from ‘resource’ predators because they are typically are after an experience. That experience could be killing, sexual assault, maybe a brawl, or many other things.With a resource predator, there’s the possibility they’ll leave you alone once they’re reasonably satisfied with whatever you give them. A process predator will typically not be satisfied with anything less than the exact thrill or level of pleasure they are seeking.

These classifications are not absolute. The entire spectrum of human behaviour means predators are inherently unpredictable. For the purpose of teaching and learning, it’s useful to draw lines somewhere. Especially when they require different approaches to deal with.

Predators of any kind tend to be opportunistic. Just as a cat will sneak up on its carefully selected prey, wait until the moment is right and then pounce, human predators tend to act the same way.

Some of the common behavioural characteristics of a predator include:

Hiding their intentions and capabilities until the last possible moment
Selecting their prey based on the highest potential reward and lowest possible risk
Choosing a location that presents them with a low chance of discovery and capture. As well as one that allows for a quick exit or has multiple escape routes. (They may also want a convenient, secluded secondary location nearby where they can take their time).

Let’s take a look at a few common scenarios where a predator may take advantage of social rules (scroll down to see some possible solutions to these):

1. When a stranger asks you for the time, the perceived proper thing to do is to oblige them. You look down at your watch or phone, and when you look back up, the person who asked is threatening you with a weapon (or they might have simply attack while you’re distracted).

2. You’re waiting for an elevator. The doors open. Inside, is a person who just gives you the creeps for one reason or another. That’s your intuition (one of your most important assets) giving you a warning you’d be well advised to listen to and act on. It is hard to act on this impulse though. It’d be plain ‘odd’ for you to not get in just because you had a weird feeling, right? You could step back and avoid getting in, but that’d make you look like a paranoid weirdo. You tell yourself it’s probably nothing (like you have a hundred other times when nothing happened), and get in.

3. You’re in your car. Someone approaches with a smile and motions for you to lower the window so he can speak to you. (Have you ever tried to defend a strike or redirect a weapon from someone outside your car whilst you’re in a seated position?) Unless you have a genuine need to speak to this person, for example talking to a law enforcement personnel, there’s no point making yourself anymore vulnerable.

4. You answer the door of your home. There’s a person outside in distress, perhaps appearing injured. You might be a bit more cautious and only open slightly, leave the door chain on, or even speak through the door. What kind of a human being turns down helping another in desperate need? That’s the type of the instinct that would make many open the door or even welcome the person inside.

Here are some possible solutions to the aforementioned scenarios:

1. If someone asks you for the time on the street and you don’t wish to comply, say “I’m in a hurry” and create distance. Another possibility is to say “Don’t you have a mobile phone?” with a smile. This forces the other person to come up with a reasonable explanation for why they need the time from you. They may also realise you’re more aware than initially perceived, and may choose to find an easier target who will follow the expected script.

If you want to give the person the benefit of the doubt, keep the person in your field of view and raise your clock or phone to where you can see both. Or give the person an estimate and keep moving. It might look a little odd, but hopefully, you place your safety as a higher priority than how people perceive you.

2. If you feel odd about entering an elevator (or any confined space) with another person, don’t get in. If you feel genuinely threatened, try to head to where other people are on the same floor. Be aware of the fact that elevators are often within isolated parts of buildings, so the attacker might not limit his attack to there. In some cases, an attacker will choose to spring his trap if he realises that you’ve noticed something’s off.

One possible tactic for avoiding sending the wrong signal is to act confused, walk away and mutter under your breath, as if you’ve gone to the wrong place. Try not to head for isolated areas, such as the stairs. Office buildings might be ideal. Entering the premises of a business even if you don’t belong there might not be an issue if you have a good explanation, such as feeling threatened.

3. There’s a strong precedent for people letting their guard down while in their vehicle, or even getting out when challenged, especially in road rage scenarios.Keep your windows up and your doors locked whenever you can.

If someone wants you to lower the window to talk, you can tell them the windows don’t work. Unless you’re boxed in and already under attack in specific circumstances, you stand a much better chance staying in your vehicle and driving away if you can.

4. If someone is at the door of your home and you have no good reason to open up, don’t. While good samaritans who help people in need are great to have in our communities, it’s not your duty to open your home to a stranger. Call emergency services if you feel there’s a threat or an injured person who needs help.

These are just examples in a world of variables and possibilities. If we could cover every possible scenario, we would. Since we can’t, all we can do is give you likely scenarios and principles to follow. In the case of the socially aware predator, one of the most important principles is not to let him take advantage of the rules that polite society conditions us into following.

This is the simplest possible way I can put it:

You have to be willing to break the rules and interrupt the process.

We don’t want to get into so-called victim blaming and suggest that people of a certain type, behaviour or appearance are inviting an attack or ‘have it coming’.

Keep in mind though, predators will tend to look for what they perceive to be easy targets. Your body language says a lot to a potential predator, even before they get into ‘interview’ range.

Predators rely on you following the script of proper social conduct. Don’t follow the script. Don’t break the law, if you can avoid it, but don’t do the expected if you have no good reason to do so.

I’m not saying if someone asks you for the time, punch them in the face and stomp their head in. Nor to break into a sprint every time a random person gets within speaking range.

It’s entirely possible to be polite when the situation calls for it, without putting yourself at a major disadvantage tactically. You just have to be ready to flip the switch and maintain your boundaries if necessary. You’re not obligated to interact with people you don’t want to interact with. You might be perceived as rude for asserting that right. Judge for yourself if it’s worth it to you.

Knowledge is power! Now that you know predators rely on certain conditions to be followed you have the power to change the rules-of-play to remove yourself from their line-of-sight.

Nils Beiskjær is a self-defence instructor and personal trainer with over 20 years of experience in the martial arts. He places a strong emphasis on the preventative aspects of self-protection and is a student of the strategies and tactics that surround real-life violence.

Tips on dealing with a dog attack (Infographic)

How to teach your children about road safety

Top 10 Mistakes That Hold Students Back